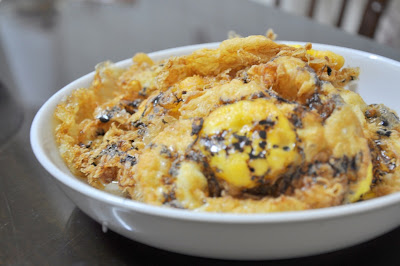 I know I’ve been disappearing for long enough that people would be wondering what have I been up to.

Well, long story… and to cut it short. I was busy and will be even more busy for this quarter of the year too. I know I’ve been neglecting this blog and also have not been updating anything about it.

Guess, that’s only 1 sign… that’s either my blogspot is growing bigger and am running out of space, or I basically no time to write something.

Sometimes, we gotta give those credits to our mother, whom being creative and realistic. On Sunday night she was watching this program called One Day Five Meals (一日五餐) that host by Chui Ling.

And one of the meal, Chui Ling was introducing was lunch in Jalan Alor the Muar Restaurant. And I know many bloggers in KL had blogged about this place.

Well… my mom didn’t specially make the sauce which was claimed by the originator, but she put dark soya sauce instead. Well, how do you find it? 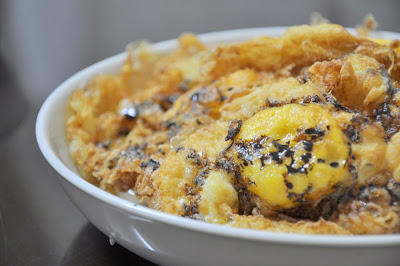 What you need is a pot of oil, heat it with light flame till it’s burning hot, and deep fried the eggs within few seconds and lift up.

Good to serve with hot steam rice….. if you’ve visited Muar Restaurant in Jalan Alor, do let me know how do you find this compared to the one from the restaurant.

Little Inbox said…
Pal, finally see your post after the long break from blogging. Good to know that you're just busy.
July 7, 2009 at 5:11 PM

J2Kfm said…
oh she covered restaurant Muar? i missed that episode then.

buzzingbee said…
it's like deep fried is it? will be oily right?

Babe_KL said…
i tried restoran muar's which is very good and i thot it was just dark soy sauce, special sauce???

Sweet Jasmine said…
Could indulge in this once in a while. Eggs are so versatile which I always stock in my kitchen.
July 10, 2009 at 11:40 AM

Hi Allie, not quite… foresee to be busy within these few months, will try to update as much as I can.

Hi Cariso, no need one…. Just have a pot of oil and heat it up, then throw in the eggs and deep fried.

Hi J2Kfm, yup, she covered that. It’s already in one of my makan list in KL.

Hi Food for Tots, :) well once in awhile we’ll crave for deep-frying food.

Hi Simple Girl, no need. Just throw it to the hot oil. Hahaha

Hi mimid3vils, nope, not at all.

Hi Buzzingbee, not quite, I don’t find it oily. Am now finding time to update the blog as much as I can. :)

Hi Sweet Jasmine, wow… it’s great to see you back here. You’re right. Eggs are versatile in my household. This reminds me of I do have many posts that yet to blog. Anyway, nobody will find this place strange, The Sarkies Corner of E&O Hotel. I remembered that day was 8th March, and yes, it’s an International Women’s Day, also Dato’ Seri Samy Vellu’s Birthday, of course, it’s also the 12th GE Day. Remembered clearly that night we were there for a family dinner, while we were enjoying our food, hubby’s phone, BIL’s phone rang non-stop. I wonder were the man stood in for election or what?? Well, let’s move on with the food… it’s always delighted to see the buffet line with these food lining up for gluttons like us. You could see these fresh oysters, prawns, scallops, muscles, salmons, tuna, all assorted sashimi are so fresh and tempting to have them all. Then, the salads line it out in a colourful way, with all sorts of salads’ cream. As for the desserts line, do I need to say more?? For those have sweet tooth, no one could resists with these desserts. Oh ya, you should try their apple
Read more