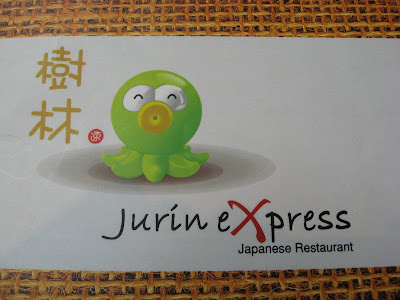 If you ask me to op for a lousy Japanese food in town, well, … this would be the one.

I had a bad experience down here and was thinking not to publish. But come to think of it, probably other people may like this place… anyway, this is very subjective.

It was a late lunch one of the weekends, and we decided to give it a try on Jurin eXpress, since we have not try it before. We’re greeted and were directed to a place that’s where we could see the alfresco area. It was nice indeed…

Then we flipped thru the menu and that time we weren’t hungry and thought of having something light, thus, we have something like sashimi. 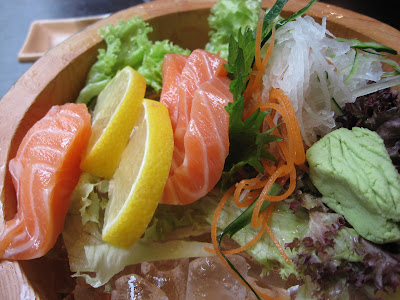 So, with that in mind, I have ordered a plate of Salmon Sashimi. It was miserable to us, cuz, it serves in a big ‘plate’ with only miserable 4 pieces.

Well, I know nothing much we could complain, cuz, if you wanna have something more worth the value, might as well go for Japanese buffet, right? 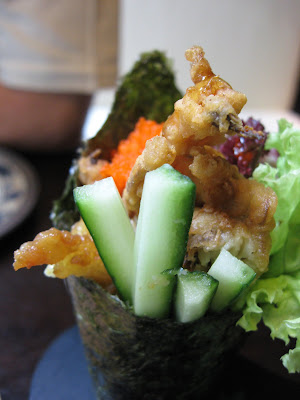 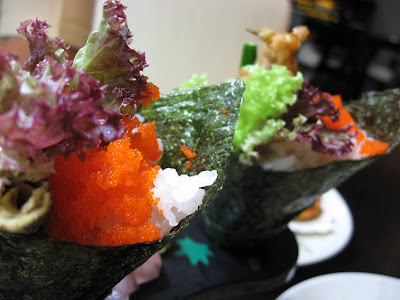 Anyway, we have 2 California Roll with Salmon Skin. That was good and crispy. 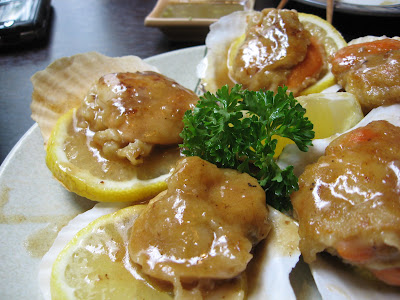 Followed by Teppanyaki Scallop which was on promotion that time. It taste horrible, and the scallop wasn’t fresh. I find it soft and it smells weird. 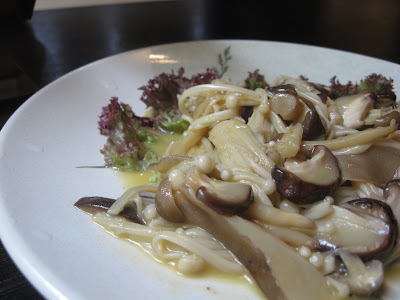 Stir fry mushroom is the last dish that came out. It was very disappointed, it tastes butter but nothing else. I supposed they put too much butter before they stir fry. Compared to Yataimura in Queensbay, Yataimura out beat them anytime.

Little Inbox said…
I dine in once at the Crystal Point there before they close down.
I just took normal set meal, no sashimi, but it cost 2 of us RM70 over. Quite expensive.
April 3, 2009 at 1:49 PM

Anonymous said…
so, how much was the pathetic salmon sashimi? Luckily the handroll was good..at least to compensate ya!
April 3, 2009 at 3:28 PM

New Kid on the Blog said…
Hi J2Kfm, ya lor, very bad experience. You're right, before it's closed down the branch in Krystal Point, we went there once, the food is pricey. We went to the one in Auto City too, food there is salty, and they claimed that Japanese like salty food which I doubt that statement very much!

Hi Little Inbox, yes yes yes, very pricey, with that price I rather have it in Kirishima, Cititel.

Hi Simple Girl, though compensate, but nothing much also la... Not worth visiting. Am still debating should I go back there again.
April 4, 2009 at 11:56 AM

Food Paradise said…
Too bad that you have a bad experience there. Our visit is good with fresh salmon of 5 pieces (under promotion rate). ^o^ and also the fresh scallops (also under promotion rate. May be when we went there they just start operation. So the food are fresher than your recent visit. ^o^
April 4, 2009 at 1:58 PM

Lingzie said…
a friend just went recently and told me she didnt like the food as well. i havent been though.
April 4, 2009 at 4:03 PM

Sugar Bean said…
hi, still remember sugar bean? we had been idle for the past few months. haha!

the scallops look so good, but too bad it tasted horible... seems like their tepanyaki food wasn't that good.
April 6, 2009 at 5:41 AM

New Kid on the Blog said…
Hi Food Paradise, in fact the scallop is on promotion. But it turns out so bad.

Hi Lingzie, think you can just take this out from your list.

food-cookies said…
Though the review wasn't so good, but the pieces of sashimi does look thick and rich..and the California Roll looked tempting!
April 6, 2009 at 9:07 AM

Andrine said…
Hi there...i hope i managed to read this review b4 i went there last week at their Gurney outlet, it was a horrible experience for me n my fren...if anyone do not believe that their food sucks, kindly order a most common Tempura Ramen, and tell me your experience abt it. i ordered a bowl of tempura ramen, the soup tasted exactly like the Cintan Mee Original Flavour soup with some sesame oil n thick soy sauce. and their teppanyaki mushroom was equally disappointing, too much better and nothing else...

Their customer service also bad, sour face and lack patience when we enquired abt the food, not showing initiatve to refill the tea and we have to wave and wave to get our tea filled..